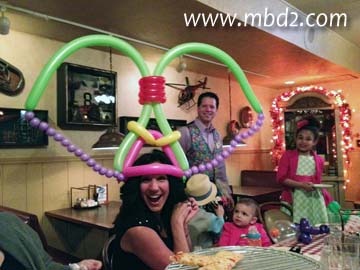 In the underbelly of the balloon entertainer’s world, community stories are told about the unappreciative customer who does not reward an entertainer at a restaurant for bringing joy and delight to the children at their table. The patron accepts the balloon offering and either neglects or does not care to further the Arts by rewarding the entertainer with a monetary offering. These people can be perceived as the takers in life.

The patrons may ask themselves, “Does this individual deserve a tip?”.  I did not seek out their entertainment nor do I expect something from them. So why should they expect a tip from me?

Let me put a twist on this discussion; if you were in a group/tribe/community, and actively contributing on a regular basis, and you freely gave away knowledge, would not a monetary tip be a good way to show appreciation?

When you help a person move, they may buy you dinner. It may only be pizza and beer, but it is something. Yet in the digital world, people click the “Like”, or say “Thanks” in the comment box, but is that not similar to the restaurant customer who avoids tipping?
If the information were entertaining, enlightening, or you actively searched would you feel obligated to contribute? Recently, I went to the John G Shedd Aquarium with my family. Inside the building are containers asking you to make a donation. However, this is not a free event; there is a fee to be educated, enlightened and to view the aquatic life.

Tipping every person you meet can put you into bankruptcy, yet I have known people who tip a server for every beer brought to the table.

I guess there are some jobs in life where a tip is just assumed and others where a tip jar must be presented to remind people to give. I can assure you, today, opening day of MLB; ballpark concession stands have a drinking cup with the word “TIPS” on it.

Nobody ever gets rich off of tips, but I have to admit they are fun to get. So, in spite of this article, I try an experiment to see if people will give a tip, click “Like”, or just walk on by.

6 thoughts on “Do you deserve a tip?”