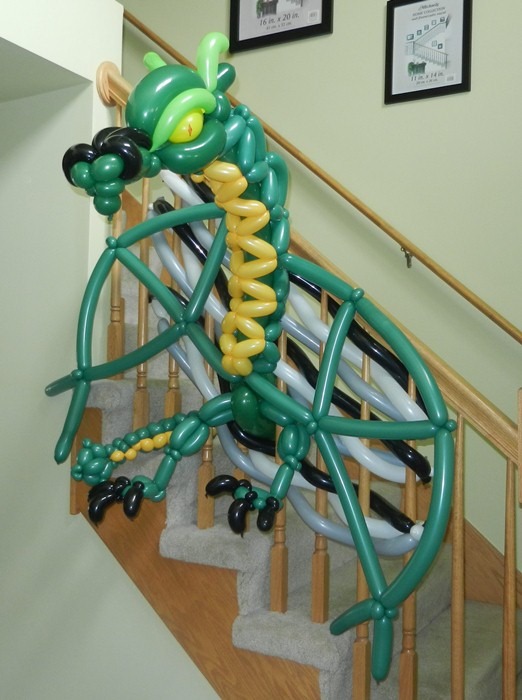 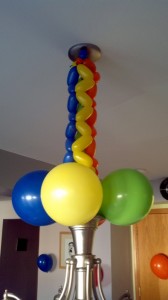 Now, I will be the first to tell you that I am not a big fan of weaving. I find it tedious and boring doing the same continuous pattern. Yet, there are times that weaving can be a handy tool. This past week it was my son’s 6th birthday and I needed to do a little balloon decorating around the house. To add more festivities to the kitchen I used an x- weave, as I call it, to go down the light fixture. I wanted to give the room a birthday party feel.

Starting at the top of the lamp I x-weaved around the chain and finished it off with four 11-inch round balloons, under inflated to about 9-inches in diameter.

As I prepared for a second birthday party in that week, I used the x-weave again for the dragon’s body. This time instead of using four different colored balloons, I chose to use two forest green and two golden rod balloons. I used a 350 balloon for the center, which allowed for stability of the dragon’s neck.

The x-weave was used for a third time on the dragon’s tail. The combination of balloons used were three forest greens and one golden rod. The golden rod was being used for an accent color and I was looking for more of a zigzag pattern on the tail.

If you never played with the x-weave, you really should try it. It is not as complicated as many of the different patterns, and if you are creative it has many uses.