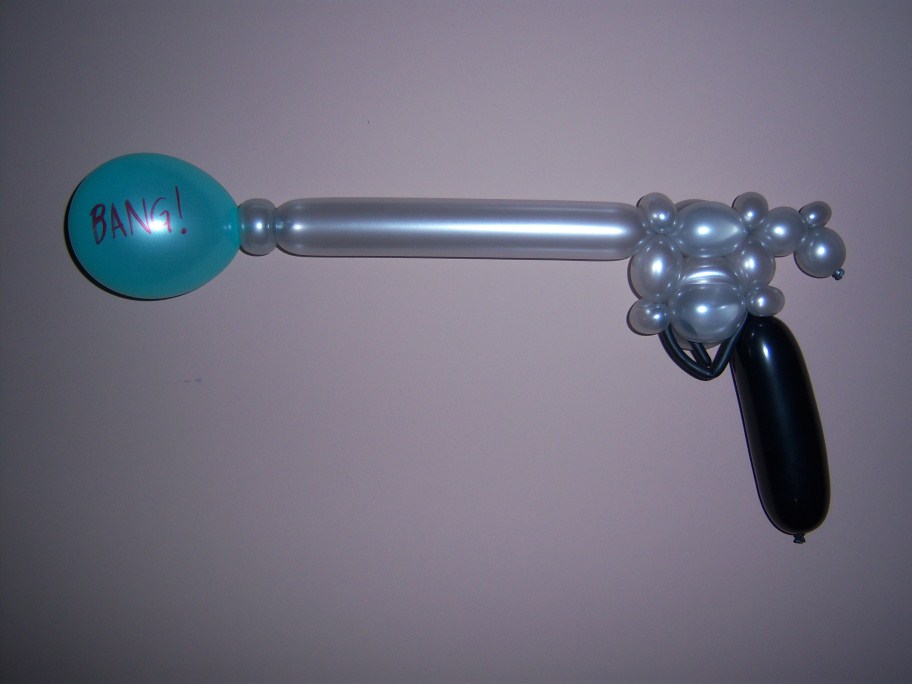 The debate, make a Balloon Gun vs. Balloon Sword.

I think we have all learned from Indiana Jones Raider of the Lost Arch it is best to have a gun vs. a sword, but in the balloon community and sometime in the general public, people think a sword is less violent then a gun.  From an entertainers point of view the gun takes more skills and creativity to make, while the sword takes very little skill to make.  So if you’re trying to impress a  client, a gun is the way to go.

Now, there are very intricate balloon swords with cool looking handles, holders, and are sturdy enough to beat the crud out of your sibling. Since a sword is used for hitting, and that’s what a child does with it, the odds of it lasting throughout the event is doubtful. I also observed that when a child has a sword in hand they have the need for speed, that is, they must run around hitting everything in sight.

One could argue that a gun is nosier, unless you put a silencer at the end, but to a child a gun must go “BANG!” However, swords which only make noise in Chinese Marshal Art movies, automatically get a “Hi-Ya” with every swing of the sword. So the point of one being nosier then the other is mute.

I could also make the argument that a gun is pointed at somebody, typically from across the room, and you hear the words “BANG!” With a sword, a child actually enters a persons personal space, and physically strikes them with a balloon. Guns = mental violence, while swords cause physical violence.

If have found myself entertaining in a Synagogue where Christmas/Holiday balloons were asked not to be made, duh. But, it was very acceptable to make swords, which I found a little disturbing.  My own beliefs came into effect thinking a place of worship is not place for a weapon. However, the client was not paying me for my opinion or views, but paying me to make balloons. After all it was their party and they were quit content with swords.

Ironically, this topic of guns vs. swords is a double edge sword, (no pun intended) both are instruments of death, both are highly requested.  You could impose your views on the client and reject their requests on the spot, turn down the job before doing it or do what the client requests.  Whichever you choose, there is always going to be the debate.  Almost like the debate if a baby should get a balloon, well that is another blog post for another day.

Thanks to Obediah Thomas for helping me break through my blog block (writers block) and forge through with some rationalized thinking or at least what I think is rational, gun vs. sword.

Subscribe to Dale’s Blog and get notified when new posting occur.