What does a balloon artists do when the airport shuts down and his flight to Florida is interrupted by a snowstorm? He goes out and plays in the snow.  That’s right, I was expecting to be winging my way across the US and heading to Florida to visit family when a snowstorm hit.  Southwest Airlines decided to cancel all flights that day.  So after plowing the drive my son wanted to make a snowman.  The snow was not good packing.  So I started to make a mound to build a snowman, but decided to make a turtle instead. 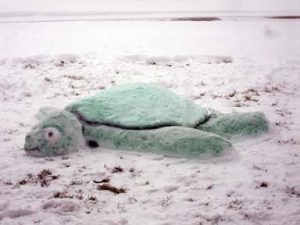 Here is a picture of me next to the turtle, this will show it actually size. 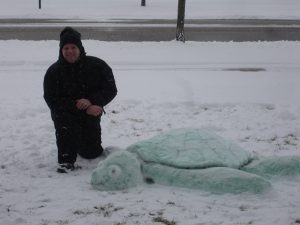 Here is a video that show the entire turtle.

Now, I just could not stop myself from sending the picture of the snow turtle to the local news station, channel 5 NBC.  The weatherman Brant Miller at the 10:00 news cast will show pictures submitted by viewers.  Guess what? They aired it at 10:25 near the end of the news cast.

Now not to be out done, Michelle decided she needed to play and created her own snow sculpture. She worked on it herself and create a snow octopus.  The bad part was it was early evening and the lighting was getting dark.