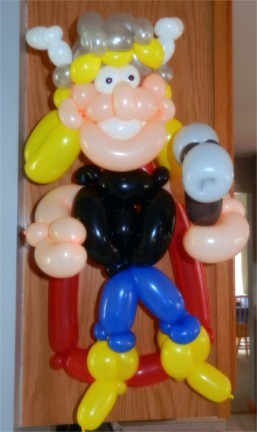 Getting sucked into the planning

Just days before my son’s 5th birthday party for the family, I  was in the car going to lunch, and my son Carter asked if he could play games at his birthday party?

My wife asked, “What type of games”?

Carter, “Stick the tail on the animal.”

“You mean, pin the tail on the donkey,” replied my wife.

Then out of nowhere, my wife says, “How about daddy makes Super Heroes, and we play stick the hammer on Thor or put the web on Spiderman?”

“Cool,” says Carter from the backseat.

My wife looks over at me and says, “It’s great to have a balloon man in the family.”

Wow, here I am, just sitting in the passenger’s seat looking out the window and “POW!” I’m sucked into this Super Heroes Squad theme party planning.

Now, I’ve worked with difficult producers and a few demanding clients, but look out when the request comes from the wife!  With a bit of persuasive talking, the Super Heroes figures would be used for decoration and not part of a game.

Around the house were Spiderman shooting his web. Hulk in full rage, which my 2.5-year-old runs around the house saying, “Hulk Mad.”  Too much Big Bang Theory for him. Captain America is protecting us from evildoers, and Thor was strategically placed to enhance the Super Heroes Squad theme with his mighty hammer.

Topping it off was Super Heroes  Squad cupcakes by Swirlz Cupcakes to complete the party.  Stay tuned friends, another birthday is quickly appreciated, and a new gauntlet will be tossed at Dad’s feet to finish.

1 thought on “Planning A Birthday Party”