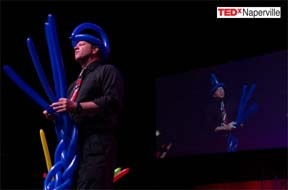 Exposing Myself with Balloons

Have you ever mentally planned out a meeting in your head and when it happens it’s nothing like you expected?  Well, that is what happened to me.  In August, I reached out to a TEDx producer, who I worked with before, and pitched him an idea.  The idea was based on a bit I do in my show.  I told him about my show and the next thing I know he is asking me more about the opening segment than the bit I was pitching.  The bit I came to pitch was tossed to the side, like a deflated balloon and we were putting a twist on a new idea.

When I was told the topic was Exposure, you could imagine all the jokes that popped into my head.  I remember having a conversation with my wife and saying…”Do you think I can get away with dropping my pants?” The little devil on my shoulder was whispering in my ear saying “Do it!”. While the angel in white was whispering “Really? You want that on the Internet and how will this affect your career?”  A quick brush of the back of my hand swept the little devil off my shoulder.

Here’s my TEDxNaperville Talk on Exposure.